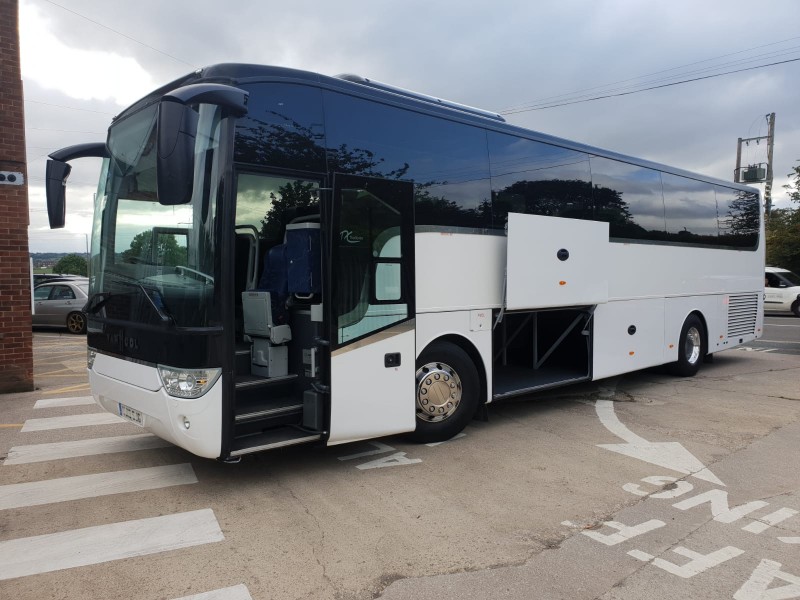 We are a well established coach company that provide transport for all occasions across England. Our extensive fleet includes vehicles from 5 to 49 seaters including wheelchar accesible vehicles if needed. Our trips include school and college transport, weddings, hen parties, football games and much more. If you have a specific requirement such as toilet on board, food and drink , air con etc you can request this to make your trip extra special and comfortable. Our luxury 49 seaters are brand new , comfortable and you will not be dissapointed.

Proffessional communication via telephone or email will make you feel at ease for your booking arrangements.

Our drivers are DBS checked and qualified professionals so you know your in good hands! They are provided with ongoing CPC (Certificate of professional competance) training, safeguarding and are fully licensed. Their aim is to make your travelling time with us enjoyable as possible!

"The driver collected us on time, we did ask if we could leave some bags and some alcohol on the coach for the way back as it was a Hen Do, he did say leave at our own risk but thought as it was only alcohol and some inexpensive gifts then they would be fine as the driver was the owner. The collection he sent a 15 seater mini bus to collect 17 people and said 2 would have to stand, so we refused to as it is dangerous, he said that we could wait another hour for anther bus to come and again we refused as we had a meal booked for 7pm, he also suggested we paid for an Uber and we pay and he would pay us back. When the mini bus did come to collect us all our alcohol was stolen, but nothing else touched, he just said i did tell you it was at your own risk. I would not recommend them at all they want to put peoples lives at risk !!!!"

"The driver was okay. But going from Manchester to Oswestry the coach was dripping water that we have a bag on the chair collecting the water. Return journey was even worse because the coach a sealed window with no air conditioning working and the fume from the engine coming in via the loose gear cover. And we have asthmatic children and youths on the coach. Thanks"

"They cancelled my booking 24 hours notice. Didn't even try to get another vehicle or help with suggestions. Cost me another £200 to get someone at short notice. Took 4 days to get my money back while I had to lay it all out again to second company"

"First trip was fine, driver showed up on time and did everything right, then while on holiday got advised that we had only payed for a one way trip and would have to pay again. Sent the money so we could get home when we returned as it was very last minute. When arriving at the airport there was nobody there, called number for the company to be told they had not booked it or sent anyone. Waited an hour for another driver to arrive."

"This company let me down completely on my wedding day and left my evening guests stranded. They had made no attempt to contact me to inform me they were running late but someone from the wedding rang to see where they were around an hour after they were due to pick up. We thought we had no other option so agreed for them to still go. Unfortunately our guests had waited too long already and found alternative transport. The company called me at around 8:30 which I missed but I am assuming they were calling to say there was no one there. This was 2 hours after the agreed time. The company have offered us half a refund. I believe if we did not contact them on our end first they wouldn’t have turned up at all. I also booked a 30 seater but after paying was asked if I would have under 20 as they would send a 19 seater instead but there was no offer of a cheaper price for a smaller bus."

"I booked a 30 seater coach to collect us for a work event at 5.30pm from our offices. At quarter to 6 it had not arrived and so I phoned the contact number 3 times - no answer! I then called from another phone and it was answered. I was told they were on their way but were coming from the other side of Bolton and there may be traffic. We continued to wait and at around 6pm I got another call saying it was there - it wasn't. She told me that it was silver and had 9 seats! I said well there are 21 of us and so where is everyone else going to go. She then said there were other vehicles coming but she didn't sound confident about that and I suspected that there were not. The bus showed up and was a 20 seater, I explained there were 21 of us and he said to 'squeeze in'. We had at that point as we were already late and no other vehicles turned up. One person had to sit on the floor of the minibus which is just not acceptable and surely not safe!? I had booked a 30 seater so that we could all go together and she told me on the phone that that was subject to availability and it said that in the terms. I've looked and cant see that anywhere and I have checked my original booking through this site which said 30 seater! The whole experience was stressful and very unprofessional and I would 100% not use the company again or recommend them to anybody."

"I booked this service for a hen party of 36 people. I was advised when I booked and confirmed I would recieve correspondence from you 24 hours prior to departure. 24 hours prior to departure I had heard nothing and so then had to ring early on the morning of the day of travel. I was advised then of my drivers name and told the call would be returned with his location. Omar our driver arrived late to our pick up point. It was also raining so many of the guests were wet. When we were on the coach we asked about toilet roll to which he had none, we looked into the toilets to see a filthy toilet also which made people use service station toilets as an alternative. I was then told the emailing to complain that the toilets were only for emergencies! When booking toilets came.under the list of facilities included in the service. Nowhere did it say only in the event of an emergency. The coach was dirty on arrival with grubby food trays, sticky floors and general poor maintenance. The following day we got back on our coach, again 15 minutes late to find rubbish that was not ours, there was still no toilet roll and we were also greeted with a dirty toilet to the point of almost full toilet. Multiple passengers vomited because of the smell. When we advised the driver he emptied the bin big and used the same dirty bin bag to hang for our rubbish whilst emptying the rubbish and receiving breaks the first thing he would do would be smoke, even entering the coach with a roll up cigarette. The complaints and concerns from our guests continued to come until one of the guests noticed the driver seemed distracted, we then found him to be using his phone whilst driving us on the motorway. The condition of the coach was poor, dirty, unkempt and the rubbish on the coach at departure did not even belong to us which we were then told the driver had another booking inbetween ours. If this is the case the coach should be released before our return journey as we paid for that service. The service provided was substandard border line dangerous to life and so for this I expect to be compensated. Our guests should not of felt anxious, unwell or unsatisfied during the weekend but your company and service meant that they did. An email of complaint was sent to the director of this company only to have a reply saying we were being charged a £75 deleting fee for an accidentally spilt drink which we did.our best to clean up. No care given to anything else that had happened during the journey. The way this was dealt with afterwards was disgusting. The driver has since been reported for the use of his phone whilst driving. DO NOT USE THIS COMPANY"

"Arrived 50 minutes late for first pick up. When I called to query the whereabouts of the taxi, control told me the driver set off on time and was stuck in traffic but it transpired he had forgot about the job as he was still near the depot in Bolton at 10.30am despite him needing to be in Didsbury, Manchester at 9.45am! We had to rearrange the order of pick ups for damage limitation, no apologies just lies from the control operator and ambivalence from the driver. Driver had old sat nav and took several wrong turns which delayed us even more. Booked 8 seater minibus, arrived as a 6 seater large taxi with 2 additional tiny seats in the front. This is not suitable for 8 adults. Feel very let down and offered no discount or apology for this farce. Reflects very badly on you and the taxi company. Arrived late to our destination. Waste of time. Do not use this firm. Cheaper for a reason!"

"Got given a very good price and accepted. I recieved confirmation that booking was accepted by supplier so I need to pay, so I did via bank transfer as instructed. When I called up to check they advised me that there was no vehicle available. I had to then find another supplier that was almost twice the price at short notice. Although the operator was friendly, the confirmation process of the website/supplier could be improved. Any vehicles not available should not be advertised as this is misleading and frustrating. Although a refund was swift I am still out of pocket for the extra charges following a higher cost alternative."